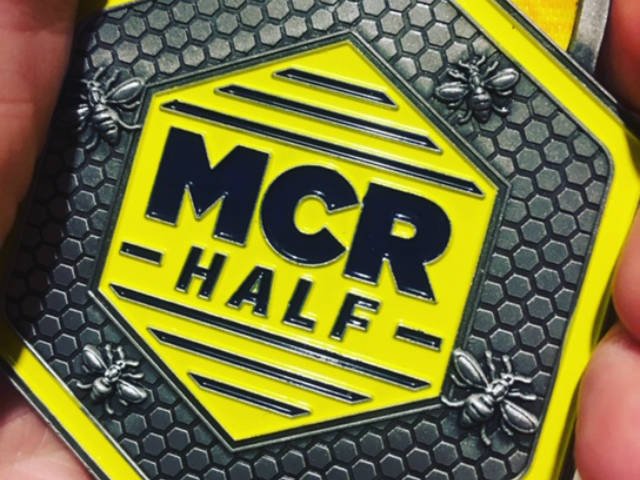 This post is a bit late, but life has been a bit crazy recently! A couple of weeks ago, on the 14th October, I was so proud to complete my second half marathon of the year – the Manchester Half Marathon.

I booked onto this second half marathon in a moment of madness after the Great Manchester Run I did in May.

To be honest, as it approached, I was dreading it quite a bit.

After a tough few months following an injury to my leg in June, I felt like I hadn’t trained enough for it. I do quite a bit of running as part of my normal week, I usually go out with my run club at least once a week and I try to do Park Run most Saturday’s. But I definitely did not have the time to do as many long runs (8 miles plus), as I would have liked. In fact, I only managed to do one long run of 10 miles about two weeks beforehand and that was pretty slow with a few stops mixed in. So, you could say I felt unprepared!!

I decided to go for it anyway, with the sole aim of enjoying and completing it (and forgetting about getting a PB). If I had to stop or walk, then I would and I wouldn’t feel bad about it.

On the day of the race, the weather was absolutely terrible and this is no exaggeration! It was cold and raining very heavily. The rain didn’t stop for the whole race and afterwards I was soaked to the bone!!

Despite the rain, I found this race to be a lot easier than last time. I think it was because it was cooler – the last one I did the weather was hot and sunny which made it much harder. Also, although this race was in Manchester, the course was much flatter than the one I did in May! In fact, it was pretty much flat all the way around.

I did find myself getting caught up in it all and at some points I was running far too fast for the distance I was doing, which meant my legs felt heavier much sooner than last time. I think I burnt myself out a bit! Although, I kept a much quicker pace than last time all the way around, which meant I finished in 2.03 – a whole 5 minutes QUICKER than the one I did in May!!

To be perfectly honest, I did not expect to run it so quickly. I honestly thought it would be similar or even slower to my first one, given the limited training. I was so surprised to get so close to two hours!

My next challenge will be to complete a half marathon under 2 hours.. watch this space!!! 🙂