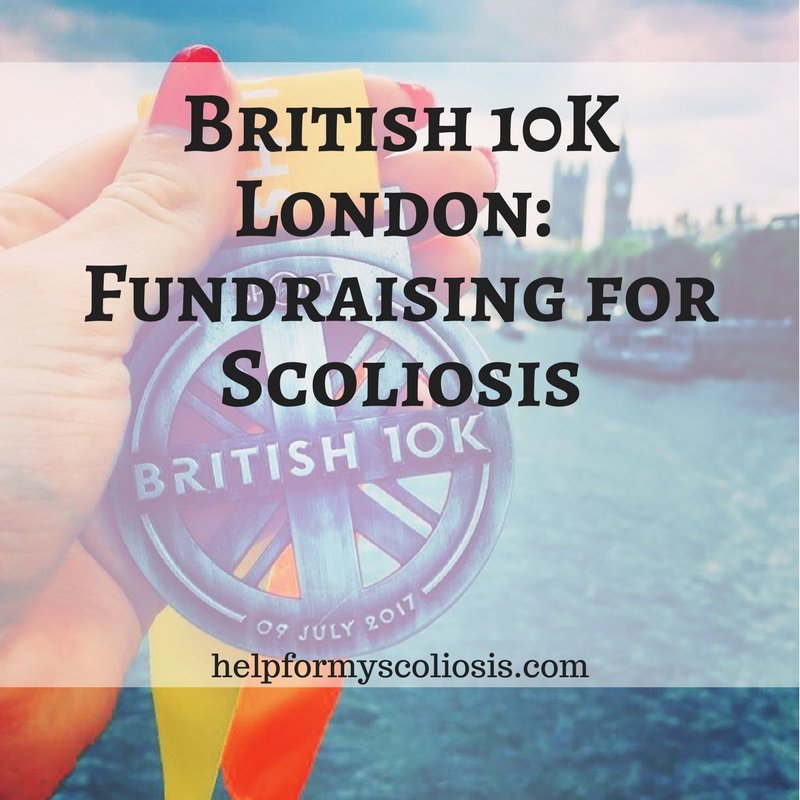 So, yesterday I achieved one of my objectives for the year and ran the British 10K for the Scoliosis Campaign Fund. How was it? Much tougher than I expected!

Those of you who follow my blog may know that I have done several 10K races this year and ALOT of training to prepare for this event. I have been training since January, as back then I could barely run 5K!

But I was determined to build my distance and take part in this event to help raise money for a charity so close to my heart.

I travelled down to London with my boyfriend on Saturday, a day before the race, as I’m based up north and the race started early Sunday morning. When we arrived in London the first thing I noticed was how hot it was compared to up north (!) and I was really hoping it would cool down for the race as I’m not great with running in the heat.

I did my very best to prepare for the race on the Saturday, I refrained from alcohol, drank lots of water and ate a lot of pasta! The refraining from alcohol bit was tough because everyone around me was drinking, as it was such a gorgeous sunny day!

We did some chilling on the Southbank, went for a meal and then had an early night (boring but I really wanted to do well!)

The day of the race

Even though we were staying in central London, we had to get up pretty early and get the tube across to the start (9.30am).

When we arrived at the bag drop area it was crazy busy (there were over 10,000 participants!) and I started to get nervous. I didn’t sleep well the night before as I was worrying about the race. This was my second race of this scale (I did the Great Manchester Run in May) so I’m still getting used to running these type of events.

We arrived in plenty of time though, so I had time to queue for the toilet and then head over to my start pen (E). I have to say at this point, that considering the scale of this event, I thought it was EXTREMELY well organised. I have taken part in smaller running events which have been utter chaos and so I was very impressed! There were plenty of signs telling us where to go which took a bit of my anxiety away.

To get to our start pens we had to walk down Pall Mall, which, lined with Union Jack flags set us up for the race nicely!

It was about a 10 minute walk to get to my start pen, which was a good warm up and a chance to take some pics. At this point it was already getting HOT, so I was starting to get concerned about running in it (I’m a northerner so I’m not used to the sun…!)

Once I reached my start pen, they did some warm ups and eventually we made our way to the start. Everyone was put in groups (A-H) depending on their speed, so the fast groups went first and we all gradually filtered round. I was in group E which was pretty much in the middle.

I have to say I really struggled with this race. I have done several 10K’s this year and I found this one the hardest by far. It was mainly to do with the heat, for me it was just too hot to comfortably run in. It was around 26/27 degrees and very humid and there were no clouds at all so the sun was burning down on us.

I have done a few training runs in hot weather but as we don’t get many really hot days up north I’m used to running in much cooler temperatures. As it was so hot, I didn’t enjoy it as much as I wanted to. I felt like I couldn’t really take in the amazing sights because I was struggling so much to keep myself going!

There were soooo many times where I was tempted to stop but I didn’t. I just keep thinking of the scoliosis charity and all those amazing people who had sponsored me and I didn’t want to let them, or myself down.

So I didn’t stop once, I kept going and all the way round I was just thinking – when will this end?! It was pure torture!! Most of the runners running near me were visibly struggling and there were so many who had to stop and walk.

Despite this though, the route itself was a great route, past all the main sights and there were lots of cheering crowds to keep us going! The highlight was probably running over Westminster bridge, as not only were the views awesome, I knew we were near the end!!

I definitely ran slower than I could have done in parts due to the heat. When I approached the finish line I had literally no energy to sprint like I usually do and just kept at my steady pace.

I collapsed in a heap!

Not quite… I found a place to sit down and catch my breath and wipe myself down (yuk!) After I recovered, I checked my Strava and it appeared my average pace was similar to that of the Manchester run, so despite the heat I wasn’t going as slowly as I thought!

In the end, I managed to complete it in exactly 1 hour, which is slightly slower than my previous 10K races (PB is 57.27) but not bad considering how I felt.

I was a bit disappointed as I was hoping to get a new PB given all the training I’ve done but I guess the elements were against me.

At the end of the day, I know I can do 10K faster but it’s not about speed. I’m just proud that I finished it, I didn’t stop and that I raised money for the Scoliosis Campaign Fund, which is what I set out to do. When it comes to it, this is all that matters.

I even managed to meet up briefly with some of the other scoliosis runners who are all amazing and inspirational! It was great to meet others with scoliosis as I had actually never met anyone else in “real life” with scoliosis before.

Overall, I had a great day even though the run was tough. Plus, the medal and finishers pack is awesome (yes, that is a tin of baked beans..!)

Thank you to everyone who has sponsored me so far, it means so much to me!

My sponsor page will be accepting donations until November, as my next challenge for the Scoliosis Campaign Fund will be trekking the Great Wall of China in October (post coming soon).

If you have scoliosis or know someone with scoliosis please consider sponsoring me to help the Scoliosis Campaign Fund.

The Scoliosis Campaign Fund raises money to support people with scoliosis and their families, and fund research into finding the causes of scoliosis and treatments to improve quality of life for patients. They are only a small charity so every penny really does mean everything.