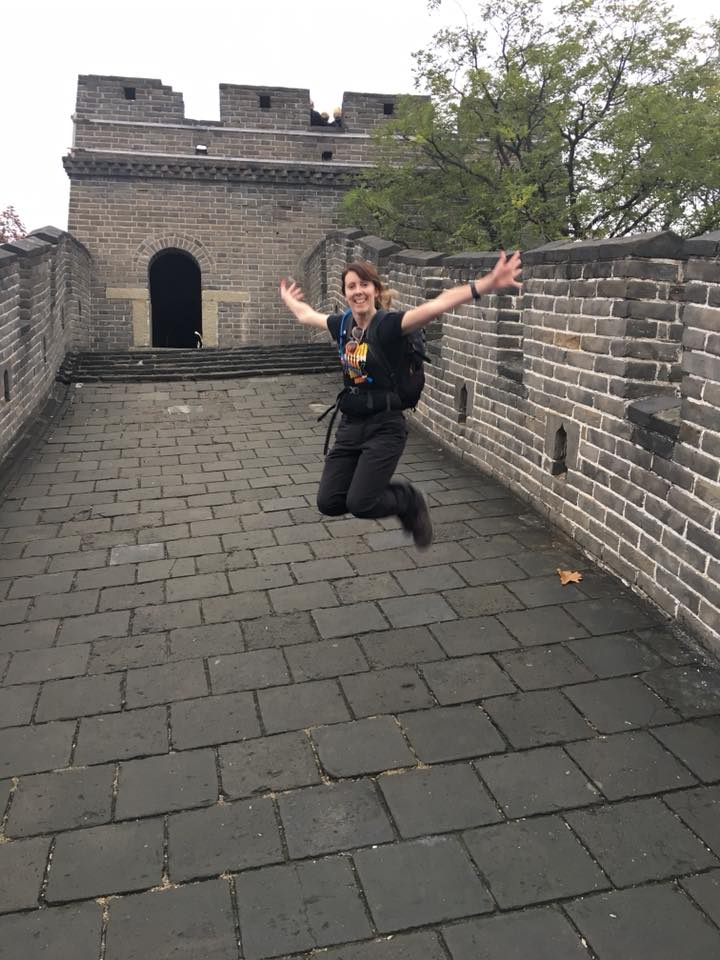 After posting about day 1 and day 2 of my Great Wall of China trek last week, I’ve finally had chance to sit down and write day 3. It still doesn’t feel real like I actually did it!

I’m so pleased that by doing this trek I have managed to raise OVER £1,000 for the Scoliosis Campaign Fund!

I’m going to leave my sponsor page open for donations until the end of November, so if you’d like to donate and support me and others with scoliosis, you can so so via this link.  🙂

So I think day 3 was my favourite day out of the whole trek mainly because of the variety. On day 3, we tackled Mutianyu section of the Wall, and then a challenging trek down the appropriately named “Heavenly Staircase” followed by a toboggan ride back down again (had to be done!)

After breakfast, we drove out to the village of Xihazi, and the day began with a stiff climb up towards the tower of Zhenbeilou. This was very tough as the terrain was very steep, rocky and slippy as we were climbing through a forest. It took about 2 hours of climbing uphill before we even reached the wall. 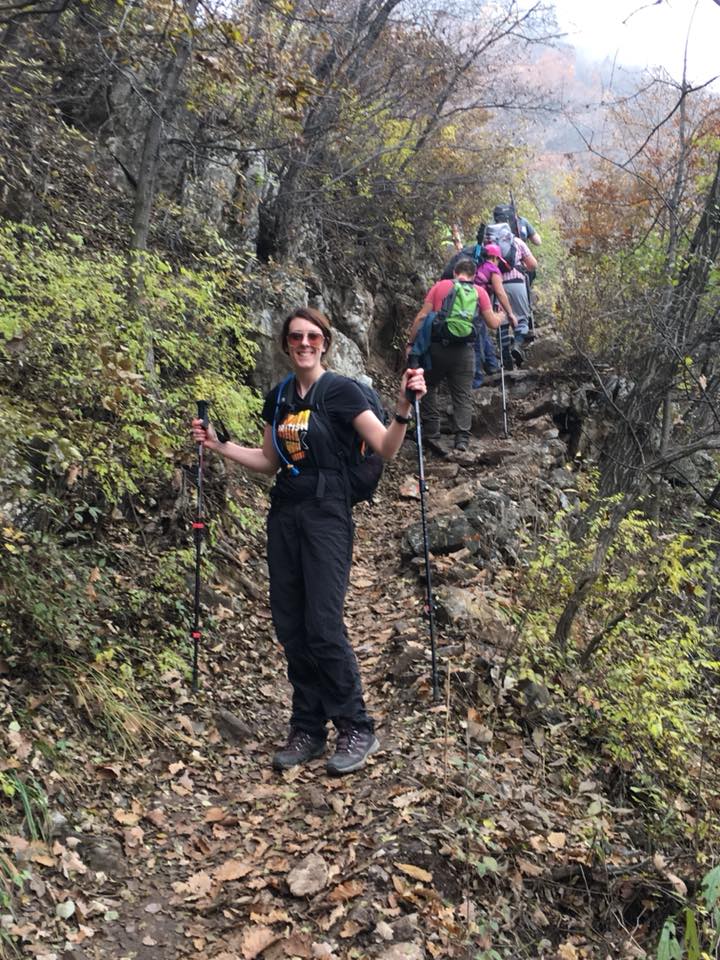 Once we reached the wall itself, it was rocky, un-renovated and overgrown with plants and trees. It was also very steep again, making it a real challenge. 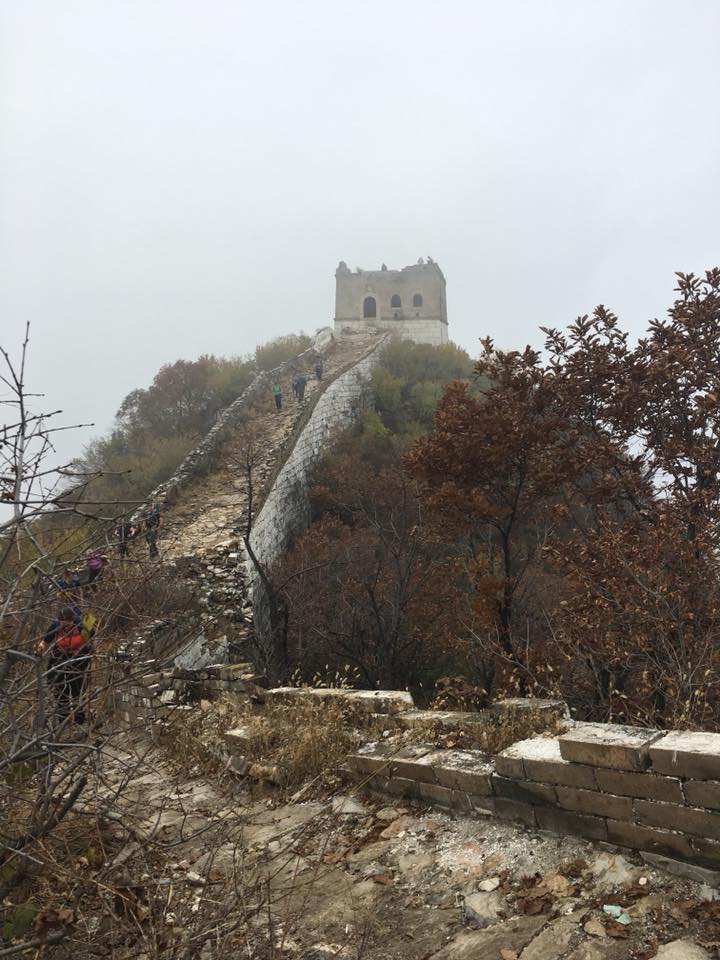 We kept going on terrain like this until we reached the peak, where we stopped for lunch. 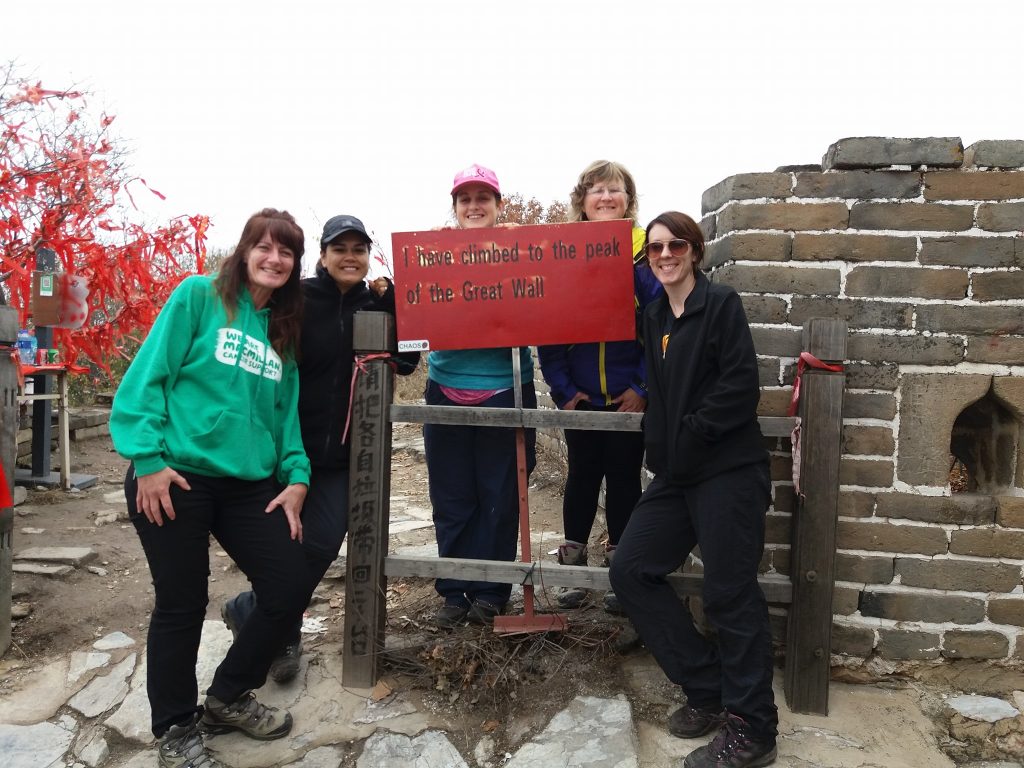 Today, we had a special treat for lunch and a break from the strange yellow bread of day 1 and 2. We had a Subway! Yes, a Subway on the Great Wall of China.. very random, but very tasty, especially after all that walking! 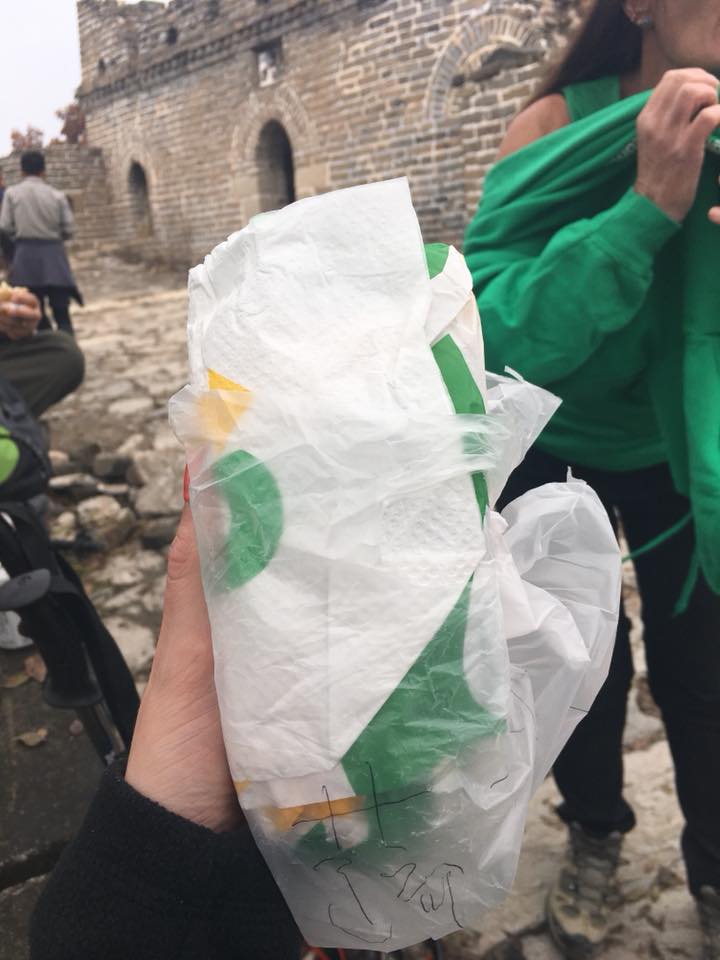 At this point, there was also the opportunity to buy a ribbon, on which people wrote messages to loved ones and tied them to the trees on the wall. I thought the red ribbons looked really pretty and I know some members of the group found this part quite emotional. 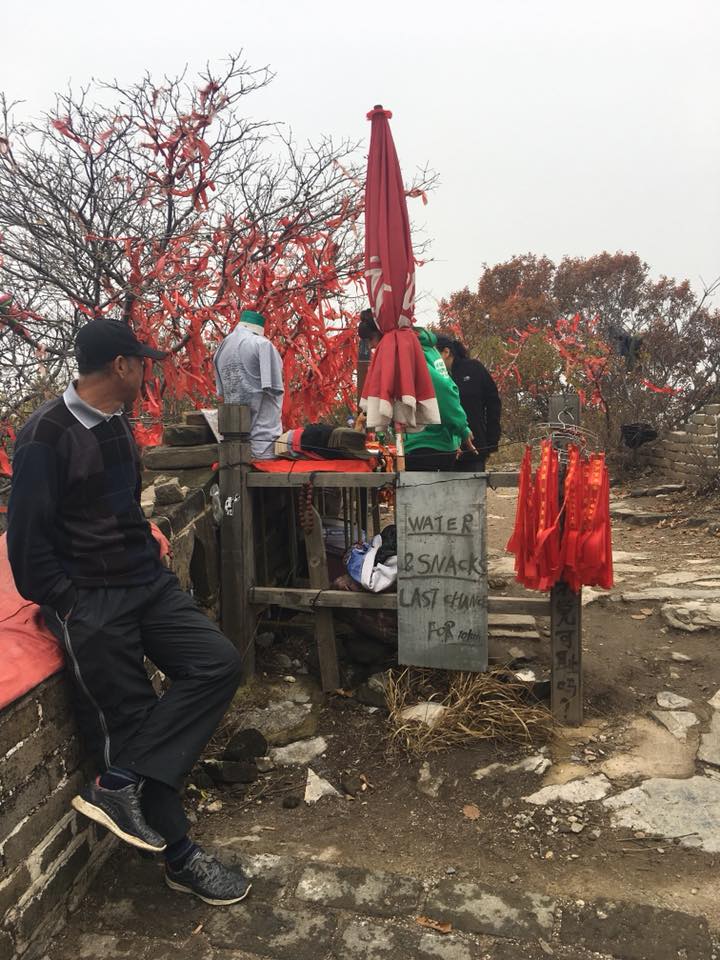 After lunch, we headed to the more touristy and renovated part of the Mutianyu section. This part was slightly easier in terms of the terrain but still very steep and tough on the knees! The views were amazing, and as today was quite misty, it made it feel quite magical, like something out of Game of Thrones (even though I don’t watch it!) 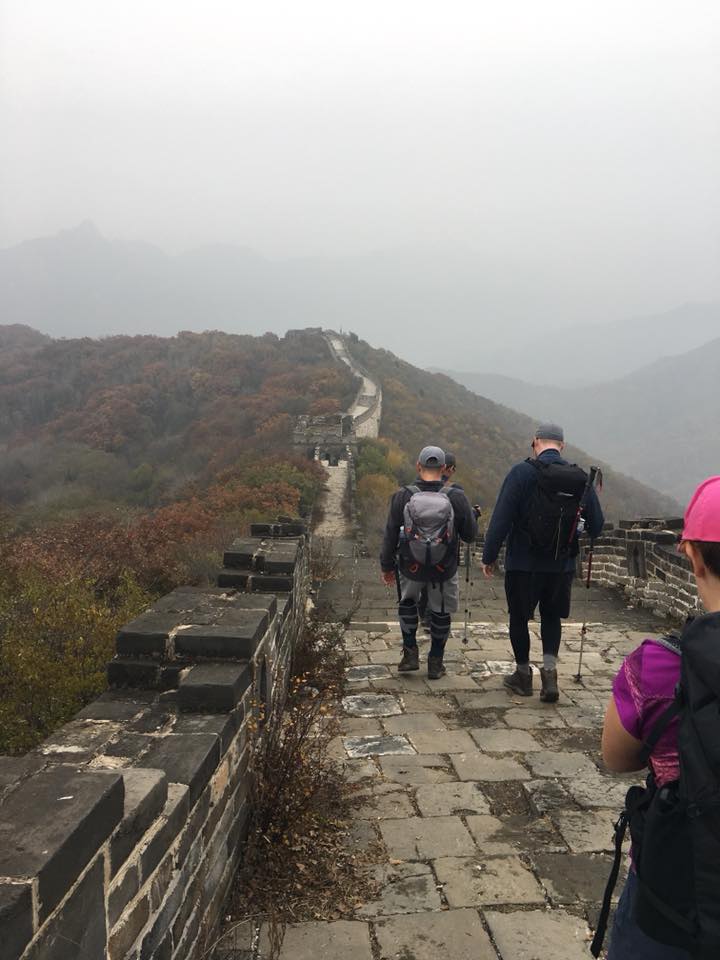 After walking for a while, we approached the extremely steep “Heavenly Staircase.” This was definitely a challenge and quite scary in parts as it was so steep but the views were breathtaking. 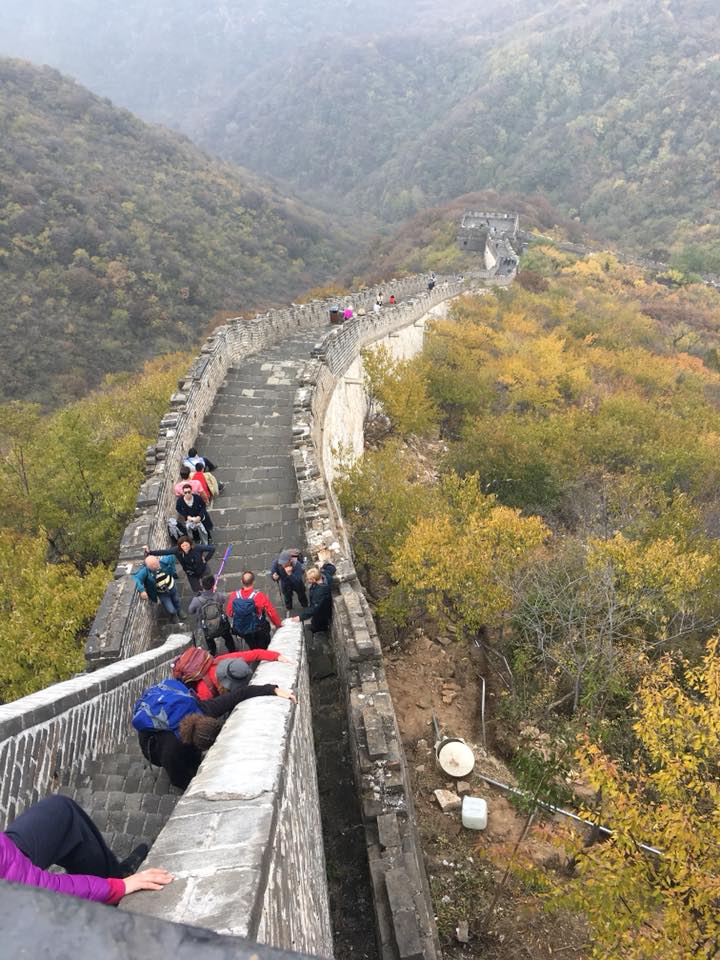 After tackling the endless steps and walking a bit further, it was decision time! Some of the group would head back down to the coach on the cable cars while myself and a few others decided to go for the infamous toboggan (why not?) 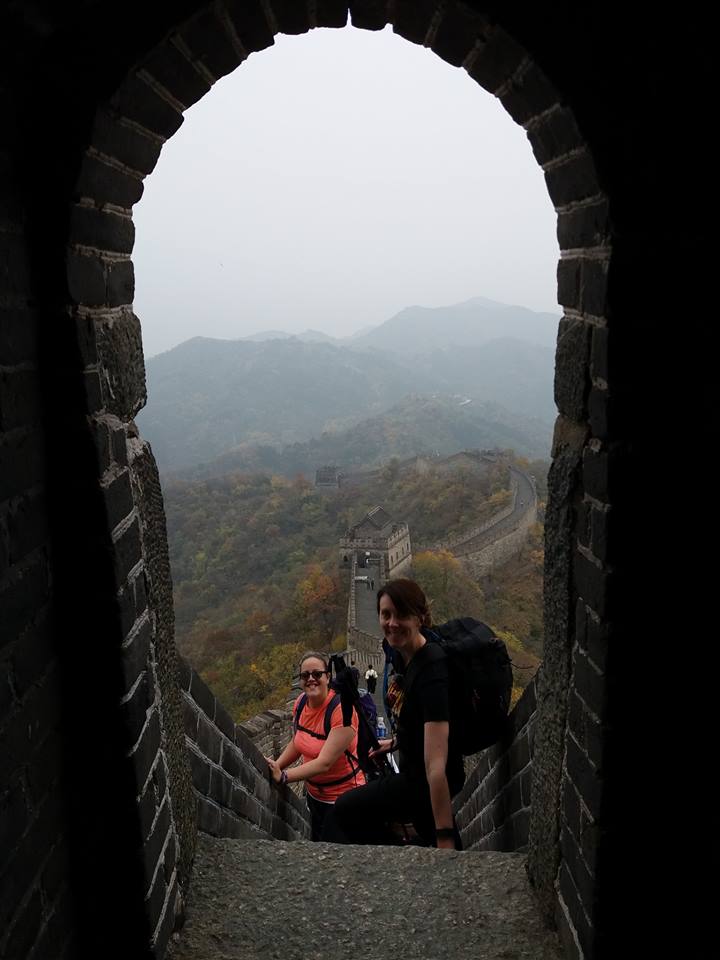 After another hour or so of walking we finally made it to the toboggan which was an experience! I have to say at this point, I was dubious and slightly worried about hurting my back (in case someone rammed into the back of me). But it was so fun! I’m really glad I did it and I kind of wish I’d filmed it like some of the others in our group did, but I was too busy holding on!! I went quite slowly so it was all good..

After the toboggan, we headed to Subway (yes, Subway) at the bottom of the wall for a well earned drink. Yes the Subway in China served alcohol. Winner!

We then piled onto the coach after another amazing day and headed back to the hotel for a shower, change and dinner.