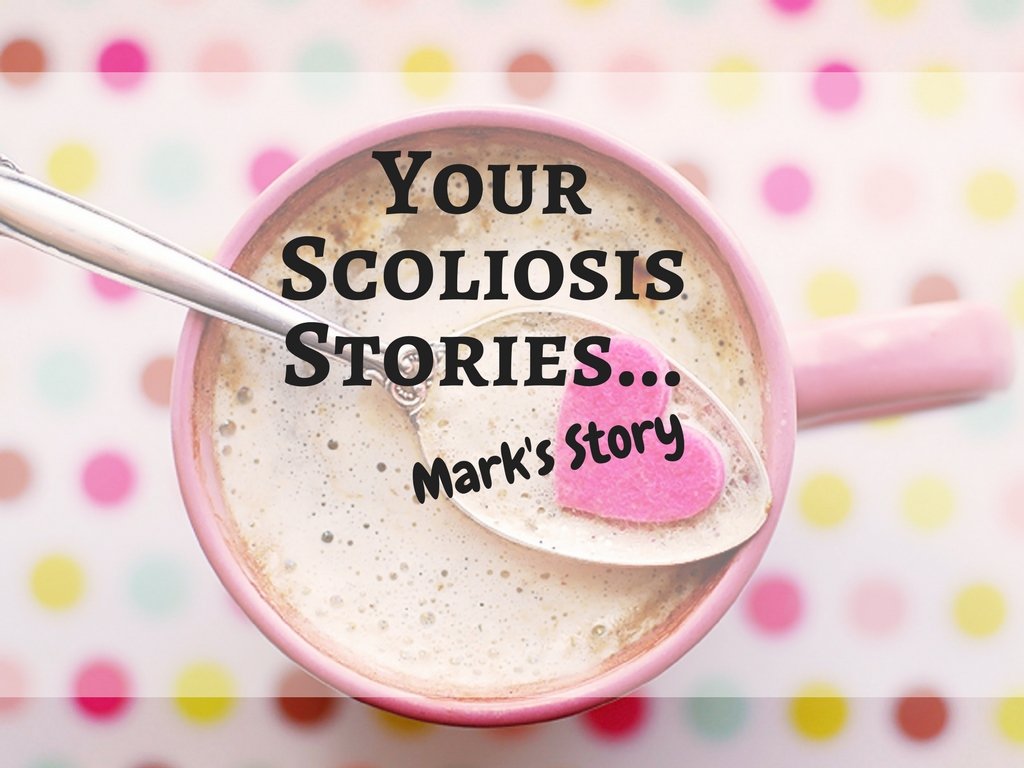 The next scoliosis story comes from Mark, who offers a different perspective. Mark is 62 and had his first scoliosis surgery 30 years ago.

As a young boy I had a lot of medical problems.  Among them I remember having asthma, anaemia, and a heart murmur.  So at the age of 12, our family doctor suggested a complete physical be done at the University Hospital in Madison.  After a whole day of tests, it was discovered I had idiopathic scoliosis.

From that day on, every doctor had the same prognosis and they didn’t bother to sugar coat it.  I was told I would not be able to do anything physical after my early twenties, so I should study hard and get a job pushing a pencil.   Back then I loved sports and hated school.  Why not just stick a knife in my heart?

Most people will probably stress a little about the anticipated difficulties of growing up, but for someone with scoliosis, it becomes an even scarier endeavour.  I wondered how I would ever manage as a husband, father, homeowner, and provider, when having to struggle with pain and fatigue every day.

For ten years I gave it a good fight by staying as healthy as possible, but at age 32, I couldn’t cope anymore and surrendered to surgery.  They tried to prepare me for what was considered at that time a very complex, risky surgery.

I was told I might come off the table paralysed, and maybe even not live through it.  The surgeon would straighten my spine using foot long rods attached to my vertebrae with hooks, screws, and nuts.  He would then fuse 9 of the vertebrae together into one solid block.

Regaining consciousness after the surgery was even worse than anything I had imagined.  One particular night in the hospital, I was in very rough shape.  It was so bad I was convinced if I were to fall asleep I would not wake up.  It sounds melodramatic now, but back then it had real life merit.

I spent two weeks lying flat on my back, except for the few times they log rolled me onto my side.  When they did that, I usually lost my breath due to pain and the nurse would have to coax me back to breathing again.

Before they sent me home to recover, they put me in a huge, plaster, body cast.  It extended from just under my chin to down over my hips.  There are other stories about my life in that cast, but I am going to fast-forward six months to when they took it off.  This was an extremely tough time, and I really wanted to put it behind me.  No such luck!

The doctor informed me it didn’t work as planned and I would have to go through it again.  I didn’t know it then, but the second surgery was not as painful and it provided an opportunity to remove all the hardware.

About twelve years later, thanks to the internet, I found a very skilled back surgeon practising in New Orleans.  He would do a third surgery to put some finishing touches on my back by removing sections of five ribs.  When my spine was straightened, those ribs had been pushed outward which made sitting in chairs difficult.  The sectioned ribs would then grow back correctly so I could sit with less discomfort.

It has been 30 years since that first back surgery.

It is generally assumed by family and friends that they fixed me, but that’s not how it is.  What they did was keep me from being disabled.  I was informed from the beginning that I would continue to have problems because now the vertebrae that are not fused have additional stress to compensate for those that are fused.  So the pain and fatigue remains, although slightly more manageable.

Scoliosis has made my life a lot harder than it needed to be. The last thing I want to mention is my continued ability to play singles tennis at a fairly high level.  It is my only safe haven in an otherwise crappy hand God has dealt me.

I’ve often jokingly told people my summers consist of just two things: playing tennis, and recuperating from playing tennis.  People wonder how that’s possible with my bad back, they don’t realise the varied movements and range of motion while playing is physical therapy for me.  However, I have to keep myself in good enough condition to handle the demands of the sport.  I know there will be life after tennis, but it can wait.

Thank you Mark for taking the time to share your scoliosis story in such detail. I’m glad that you are still able to play tennis and that this helps you to manage your pain.

It’s interesting to hear stories from those who have had the surgery a long time ago.

As an aside, it’s important to note that scoliosis surgery (and the hardware used) has evolved in 30 years. Nowadays most people are up walking around a few days after surgery and body casts are not required. The instrumentation generally used now is much stronger (titanium) and complications with the hardware/fusion are rarer than they were 30 years ago. This is an example of how far treatment for scoliosis has come in 30 years.